These Vegan Fall Desserts will get you in that Sweater Weather mood in no time! Cozy cinnamon, apple, pear and pumpkin are the main ingredients in these tasty and comforting, sweet Autumn treats. 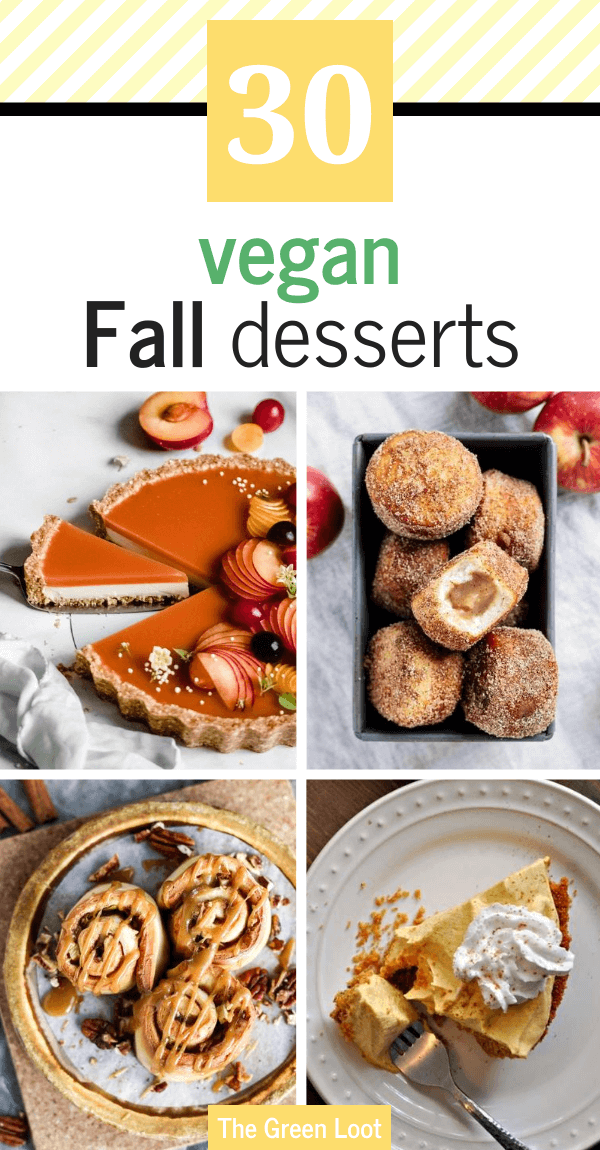 There is a fantastic charm and atmosphere to fall. All the colors of fall, yellow, red, brown bring a certain comfort in the ever so slightly cold mornings and nice. Even if you don’t live near a forest, these sweet recipes will certainly get you in the Fall mood.

Cozy up under a blanket and enjoy these amazing vegan fall desserts!

These sugary donuts taste like a crisp Autumn day at the state fair. They’re all about cinnamon and apple with a hint of ginger.

While this apple spice cake is baking, your house will fill with aromas so intoxicating, everyone will magically appear in the kitchen.

You thought cinnamon rolls were a decadent treat, right? How about caramel apple cinnamon rolls? It’s a double-down on dessert decadence.

You’ve got to taste this raw apple cake to believe it. It’s grain-free and vegan and tastes even better after a day in the refrigerator.

Vegan apple-spiced donuts? Oh, no, I really shouldn’t. Wait, these beauties are oven-baked and have a cardamom maple glaze? On second thought, I don’t mind if I do.

The crumbly texture and the combo of cinnamon and cardamom makes this version of an apple pie really unique — and it’s vegan and gluten-free!

All the warm spices of Fall — cinnamon, nutmeg and allspice — added to brown sugar and applesauce makes this cake taste like home-grown love.

Surprise someone with a plate of these chewy and creamy mini raw caramel apple cheesecakes. Make enough to share or there may be trouble.

No fork or plate? Never fear, the portable apple hand pie is here! All the pie yumminess without dirtying a single dish.

Tired of being shamed because you eat apple pie for breakfast? Apple pie bread is the perfect solution. Tastes just like the real thing but with zero guilt!

Who doesn’t want a bowl of warm apple crisp on a cool Autumn night? This version has maple and pecans, plus the fragrant fall spices you love.

What does apple pull apart bread taste like? Imagine if a warm loaf of apple bread fell for a sticky batch of cinnamon rolls and formed a perfect union.

Who’s in the mood for some whimsy on a stick? Perfect for a kid’s party or for some fun adult sweet-time.

Traditional pumpkin pie can be so one-note. Not this one! Its light and fluffy pumpkin mousse floats like a cloud on a graham cracker crust.

I’ll take a latte and the mini pumpkin muffins, please. Yes, the ones dusted with cinnamon-sugar. Oh, and sneak a few extra for me. They’ll be my dessert later tonight.

No bake and totally easy to make — this six-ingredient dessert comes together in 10 minutes. Then you and the pumpkin pudding can both chill for a while.

If you crave a sweet vegan bite, go to the freezer for a mini pumpkin pie cheesecake. If someone hungrier got there first, it’s easy to make more!

A totally vegan version of classic pumpkin pie that tastes just like the original. Take a bow, coconut milk, it’s all thanks to you.

How do you give a standard vegan pumpkin muffin an upgrade? Add chocolate chips, of course! Fall spices plus chocolate decadence equals yum!

You don’t need Starbucks for your pumpkin scone fix. This recipe does the trick with two different glazes, a white one and a spice one.

What would Autumn be without pumpkin bread? Have it on hand to offer guests arriving in from the blustery cold. You don’t even have to tell them it’s healthy.

It’s dessert drama time! Wow your guests by flipping this moist and spicy pear upside-down out of the pan in front of their very eyes.

It was a dark and stormy night. Helpless and alone, I slid my fork into this dark and mysterious chocolate pear cake. The windows shuddered and my heart fluttered as I took another bite.

Trying to cut down on the sugar? This recipe is a great option. It gets its sweetness from the fruit and the deliciousness comes from the warm, fall spices.

This no-bake plum vanilla tart is simply a showstopper. Make it and tell your friends you were a world class pastry chef in another life. They may actually believe you.

There’s nothing that feels as comforting as a fruit crumble. This one is simple — made with fresh plums, sliced apples plus a few key pantry ingredients.

Grapes soaked in wine sounds like a good idea. Cover them with sugar and orange zest and that good idea becomes great! 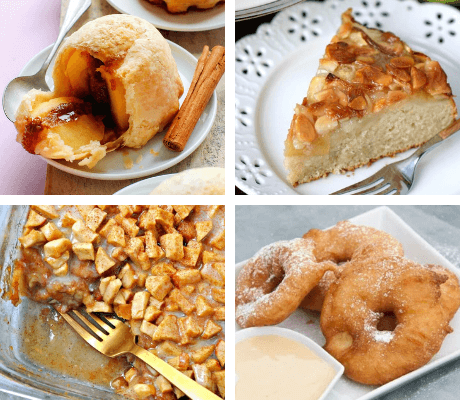 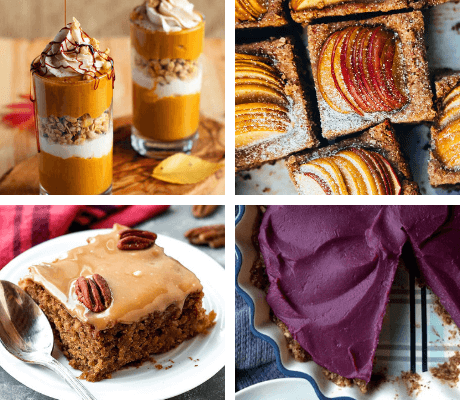 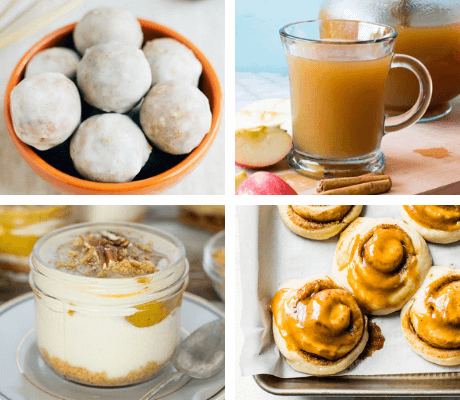 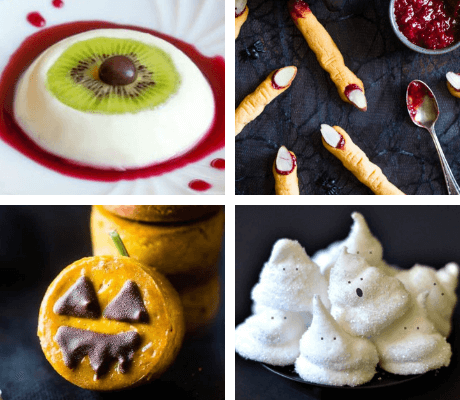 What are *your* favorite vegan Fall dessert recipes?

Let me know in the comments below! 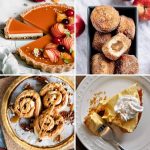 These Vegan Fall Dessert Recipes are made with cinnamon, apple, pear and pumpkin as the main ingredients. Sweet and cozy Autumn treats for baking and more.
Author Kate @ The Green Loot